Visiting Halkidiki in northern Greece gives you the opportunity to plan some trips to other beautiful places as well. Arrange some excursions lets say that will remain unforgettable to you. So in this section we will say a few words for some of them in case you would like to make some more miles while your staying in Halkidiki.

At the northwestern edge of the Plain of Thessaly, near Pinios river in central Greece are located Meteora. Literally the name means “something suspended in the air”. Meteora is one of the largest and most important complexes of Eastern Orthodox Monasteries in Greece after Mount Athos. The six monasteries are built on natural sandstone rock pillars. The nearest town is Kalambaka. Meteora is included on the UNESCO World Heritage List.

According to studies the pinnacles were formed 60 million years ago during the Pleogene Period. The sandstone rocks rise from the ground and are mixed of sandstone and conglomerate.

The climate in the region varies according to the time of the year. It may be sweltering during summertime but extremely cold in wintertime.

Below we give you also a list of the Monasteries you should definitely visit one by one if you visit Meterora.

The Holy Monastery of Great Meteoron

This is the largest of the monasteries located at Metéora. It was erected in the mid-14th century and was the subject of restoration and embellishment projects in 1483 and 1552. The building serves as the main museum for tourists. The Katholikon (main church), consecrated in honour of the Transfiguration of Jesus was erected in the middle of 14th century and 1387/88 and decorated in 1483 and 1552.

The Holy Monastery of Varlaam

The Holy Monastery of Varlaam is the second largest monastery in the Metéora complex. It was built in 1541 and embellished in 1548. A church, dedicated to All Saints, is in the Athonite type (cross-in-square with dome and choirs), with spacious exonarthex (lite) is surrounded by a dome. It was built in 1541/42 and decorated in 1548, while the exonarthex was decorated in 1566. The old refectory is used as a museum while north of the church is the parekklesion of the Three Bishops, built in 1627 and decorated in 1637.

The Holy Monastery of Rousanou/St. Barbara

Was founded in the middle of 16th century and decorated in 1560.

Built in the 16th century, is a small church. It was decorated by the Cretan painter Theophanis Strelitzas, in 1527.

The Holy Monastery of St. Stephen

Is a small church built in the 16th century and decorated in 1545. This monastery rests on the plain rather than on a cliff. It was damaged by the Nazis during World War II who believed it was harboring insurgents and was abandoned. Nuns took it over and reconstructed it.

The Monastery of the Holy Trinity

You are able to travel to meteora by train, bus or your own car.

There aren’t any direct trains between Thessaloniki and Kalampaka / Meteora. You need to change trains in Larissa. The total travel time is between 2h 50 min and 4 h 18 min, depending on the type of train you are taking and the time spent in Larissa waiting for the connection. Once you get to Kalampaka, you need to either take a local bus or hike to Meteora.

There are about six buses daily which connect Thessaloniki to Kalampaka, the city located near Meteora. The journey takes about 3 hours. Once you are in Kalampaka you can either take a local bus to take you to the monasteries (30 minutes ride) or embark on a long hike.

The driving distance between Thessaloniki and Meteora is 216 km and it takes about 2.5 hours.

Our Hotel suggestions near Excursion to Meteora

Rent for Vacation Excursion to Meteora 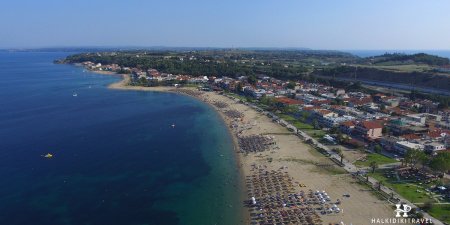