The first Greek settlers of Halkidiki came from Chalcis and Eretria, cities in Euboea, around the 8th century BC who founded cities such as Mende, Toroni, and Skioni. A second wave came from Andros in the 6th century BC.

The ancient city of Stageira was the birthplace of the great philosopher Aristotle. During the Peloponnesian War, Chalkidiki was a famous war theatre between Athens and Sparta. Later, the southern Greek colonies of the peninsula were conquered by Philip II of Macedon and Chalkidiki became part of Macedonia (ancient kingdom). After the end of the wars between the Macedonians and the Romans, the region became part of the Roman Empire, such as the rest of Greece.

During the following centuries, Chalkidiki was part of the Byzantine Empire (East Roman).

On a chrysobull of emperor Basil I, dated 885, the Holy Mountain (Mount Athos) was proclaimed a place of monks, and no laymen, farmers, or cattle-breeders were allowed to settle there.

The next years, with the support of Nikephoros II Phokas, the Great Lavra monastery was founded.

Athos with its monasteries is since then self-governed until nowadays.

After a short period of Latin domination (Kingdom of Thessalonica), the area became Byzantine again until its conquest by the Ottomans in 1430. During the Ottoman period, the peninsula was notable for its gold mining; an essential economic factor for the locals and the Ottoman empire.

In 1821, the Greek War of Independence started, and the Greeks of Chalkidiki revolted under the command of Emmanouel Pappas, a member of Filiki Eteria, and other local fighters.

The revolt was progressing slowly and unsystematically. The insurrection was confined to the peninsulas of Mount Athos and Kassandra.

One of the main goals was to restrain and detain the coming of the Ottoman army from Constantinople (Istanbul), until the revolution in the south (mainly Peloponnese) was stable. Finally, the revolt resulted in a decisive Ottoman victory at Kassandra. The survivors, among them Papas, were rescued by the Psarian fleet, which took them mainly to Skiathos, Skopelos, and Skyros. The Ottomans proceeded in retaliation, and many villages were burned.

Finally, the peninsula was incorporated in the Greek Kingdom in 1912 after the Balkan Wars.

In June 2003, at the holiday resort Porto Carras located in Neos Marmaras, Sithonia, leaders of the European Union presented the first draft of the European Constitution. 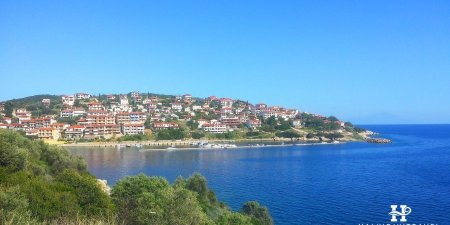