In the Central Macedonia in Greece in the current Pella regional unit is located an ancient Greek city called Pella. Pella was the capital of the ancient kingdom of Macedon. The Archaeological Museum of Pella is also located in the area.

Originally the name is coming from the name Doric Apella meaning a ceremonial location where decisions were made. However, the local form of Greek was not Doric, and the word exactly matches standard Greek pélla "stone", possibly referring to a famous landmark from the time of its foundation.

Based on the descriptions provided by Titus Livius, the site was explored by 19th-century voyagers including Holand, Pouqueville, Beaujour, Cousinéry, Delacoulonche, Hahn, Glotz and Struck. The first excavation was begun by G. Oikonomos in 1914–15. The modern systematic exploration of the site began in 1953 and full excavation was being done in 1957. The first series of campaigns were completed in 1963, more excavations following in 1980. These digs continue in the section identified as the agora.

In February 2006, a farmer accidentally uncovered the largest tomb ever found in Greece. The names of the noble ancient Macedonian family are still on inscriptions and painted sculptures and walls have survived. The tomb dates to the 2nd or 3rd century BC, following the rule of Alexander the Great.

Archaeological digs in progress since 1957 have uncovered a small part of the city, which was made rich by Alexander and his heirs. The large agora or market was surrounded by the shaded colonnades of stoae, and streets of enclosed houses with frescoed walls round inner courtyards. The first trompe-l'oeil wall murals imitating perspective views ever seen were on walls at Pella. There are temples to Aphrodite, Demeter and Cybele, and Pella's pebble-mosaic floors, dating after the lifetime of Alexander, are famous: some reproduce Greek paintings, one shows a lion-griffin attacking a stag, a familiar motif also of Scythian art, another depicts Dionysus riding a leopard.

THE ARCHAEOLOGICAL MUSEUM OF PELLA

The building was designed by architect Kostas Skroumpellos and is located on the site of the ancient Pella. It was completed in 2009.

It is situated near the archaeological site of the ancient Macedonian palace. The building has a rectangular atrium, as a reference to the central peristyle courtyard of ancient houses in Pella.

There are four thematic groups. The first one is the daily life in Pella, the second is about the public life, the third group consists of mosaics from Pella’s sanctuaries and other findings and the fourth one is the findings from the city cemeteries.

The last grouping is the palace gallery and presents information about the architectural form of the palace, and the life and personality of Alexander the Great. 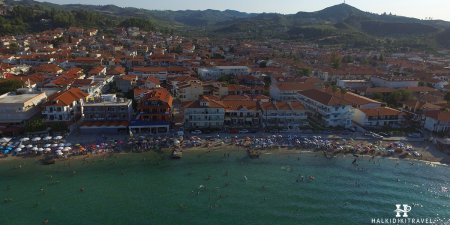