It was founded by Cassander of Macedon and has a history of more than 2300 years. It was an important metropolis during the Roman period and the second wealthiest city of the Byzantine Empire.

Thessaloniki is also known for its University. It’s called Aristotle University of Thessaloniki and is the largest in Greece and the Balkans.

For your stay in Thessaloniki we can suggest you the luxurious Makedonia Palace or the wonderful Electra Palace that is located at the main square of Thessaloniki, the Aristotles square.

BOOK A ROOM IN THESSALONIKI

Due to the city's rich and diverse history, Thessaloniki houses many museums dealing with many different eras in history. Two of the city's most famous museums include the Archaeological Museum of Thessaloniki and the Museum of Byzantine Culture.

The Archaeological Museum of Thessaloniki was established in 1962 and houses some of the most important ancient Macedonian artifacts, including an extensive collection of golden artwork from the royal palaces of Aigai and Pella. It also houses exhibits from Macedon's prehistoric past, dating from the Neolithic to the Bronze age. The Prehistoric Antiquities Museum of Thessaloniki has exhibits from those periods as well.

One of the most modern museums in the city is the Thessaloniki Science Center and Technology Museum and is one of the most high-tech museums in Greece and southeastern Europe. It features the largest planetarium in Greece, a cosmotheater with the largest flat screen in Greece, an amphitheater, a motion simulator with 3D projection and 6-axis movement and exhibition spaces. Other industrial and technological museums in the city include the Railway Museum of Thessaloniki, which houses an original Orient Express train, the War Museum of Thessaloniki and others. The city also has a number of educational and sports museums, including the Thessaloniki Olympic Museum.

The Atatürk Museum in Thessaloniki is the historic house where Mustafa Kemal Atatürk, founder of modern-day Turkey, was born. The house is now part of the Turkish consulate complex, but admission to the museum is free. The museum contains historic information about Mustafa Kemal Atatürk and his life, especially while he was in Thessaloniki. Other ethnological museums of the sort include the Historical Museum of the Balkan Wars, the Jewish Museum of Thessaloniki and the Museum of the Macedonian Struggle, containing information about the freedom fighters in Macedonia and their struggle to liberate the region from the Ottoman yoke.

Ruins of the Roman Forum (Ancient Agora) in Thessaloniki centre.

Thessaloniki is home to a number of prominent archaeological sites. Apart from its recognized UNESCO World Heritage Sites, Thessaloniki features a large two-terraced Roman forum featuring two-storey stoas, dug up by accident in the 1960s. The forum complex also boasts two Roman baths, one of which has been excavated while the other is buried underneath the city. The forum also features a small theater, which was also used for gladiatorial games. Although the initial complex was not built in Roman times, it was largely refurbished in the 2nd century. It is believed that the forum and the theater continued to be used until at least the 6th century.

Another important archaeological site is the imperial palace complex which Roman emperor Galerius, located at Navarinou Square, commissioned when he made Thessaloniki the capital of his portion of the Roman Empire. The large octagonal portion of the complex, most of which survives to this day, is believed to have been an imperial throne room. Various mosaics from the palatial complex have also survived. Some historians believe that the complex must have been in use as an imperial residence until the 11th century.

Not far from the palace itself is the Arch of Galerius, known colloquially as the Kamara. The arch was built to commemorate the emperor's campaigns against the Persians. The original structure featured three arches, however only two full arches and part of the third survive to this day. Many of the arches' marble parts survive as well, although it is mostly the brick interior that can be seen today.

Other monuments of the city's past, such as the Incantadas, a Caryatid portico from the ancient forum, have been removed or destroyed over the years. The Incantadas in particular are on display at the Louvre. Thanks to a private donation of €180,000, it was announced on 6 December 2011 that a replica of the Incantadas would be commissioned and later put on display in Thessaloniki. 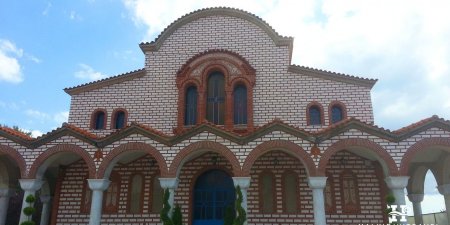