Ierissos is a small town of 3,500 inhabitants which is located in the south-eastern coast of northern Halkidiki. Its distance from Thessaloniki is 100 km and the proposed route to get here is via the National Road of Thessaloniki - Kavala. Alternatively, you can drive through Arnaia between the mountains of North Halkidiki. Ierissos is a beautiful, modern, well-structured city with green spaces, parks, and a beautiful sea with a long sandy beach.

Near the beach of Ierissos, there are several hotels and rooms to let. You can choose where to stay from a wide variety of choices. We recommend you choose "Dionysos Apartments" which is built in a lush garden that is 350 meters from the beach Kakoudia of Ierissos. Also the "Panorama Studios," offers a panoramic view across Ierisso. For camping lovers, Ierissos provides two campsite options.

The area of Ierissos is a unique holiday destination with several beaches which were awarded the blue flag and have beach bars, cafes and traditional taverns.

BOOK A ROOM IN IERISSOS NOW

Our Hotel suggestions near Ierissos Halkidiki 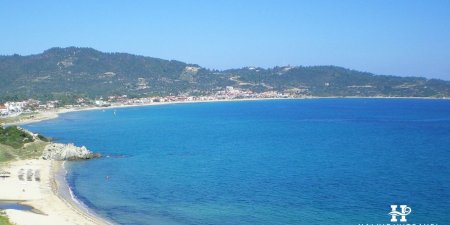