Nea Roda is a coastal settlement built at the beginning of the third peninsula of Halkidiki. It’s located at the narrowest point of the peninsula and the sea hits the land on both sides. Nea Roda is known from history since here Xerxes in 480 BC opened a canal in order to pass the fleet and at the same time to avoid sailing arround Athos, as the last time he tried to do so his fleet was sunk.

For your stay you can choose Lazaridis Luxury Studios & Apartments which is located just 100 meters from the awarded beach of Nea Roda or Xerxis Studio.

Nea Roda is a quiet picturesque village, with elegant houses, flower gardens and pristine beaches with golden sand. In the harbor tie fishing boats, excursion boats and yachts which are sailing daily arround Athos. Nearby there is the ancient town of Ouranoupolis. In the coastal zone from Tripiti to Mount Athos bay there are large hotel complexes.

Regarding the "Canal of Xerxes", the canal today is buried and has been identified between the villages of Nea Roda and Tripiti. In 2008 researches which took place by British and Greek engineers show the exact location and its dimensions. The canal has a length of two kilometers and a width of 30 meters and the maximum depth is estimated at 15 meters. it is visible from a great height, since the place has suffered from subsidence. The archaeological investigations have shown that immediately after its use by Xerxes the canal was abandoned over the years was banked ". 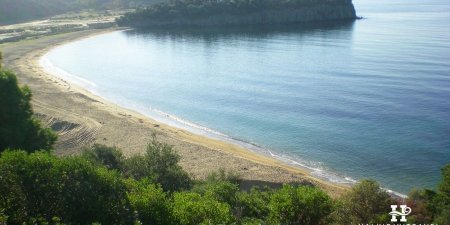