A myth you have to know this summer

A myth you have to know this summer

There are many myths that became well known to the world and are closely connected to Greece. Though there are others that people doesn't know about them and they took place in destinations likeHalkidiki where thousands of travelers choose to spend their summer time. So we thought to give you something that you should keep in mind and be thrilled this year if you visit the most crowded summer destination in Greece. Your kids will love it!

Three small peninsulas Kassandra, Sithonia and Athos consist the peninsula of Halkidiki in northern Greece. Many of its features were known in ancient times and people tried to give explanations. A long time ago the name of Kassandra was Phlegra which means Place of Fire. It is widely believed to be the land of Giants and the battle ground where a fight between them and Gods took place. And that happened when Giants tried to drive Gods out from Mount Olympus. According to the legend, Enceladus, one of the Giants, was crushed by a rock that the Gods threw at him and todays is buried in Kassandra, not having been killed, and from time to time tries to free himself from the weight that is crushing him and his struggles and effort creates earthquakes. The earthquake Giant and his Myth is connected with the geological phenomena which are evident in Kassandra like the subsidence in the center of the peninsula and the steam from the hot sulfur springs at Aghia Paraskeui.

The third peninsula Athos at the end of Halkidiki took its name by another Giant whos name was Athos who during the great battle threw the mountain at the Gods.

The second peninsula at last received its name from Sithon, son of one of the twelve Gods of Olympus, Poseidon. Sithon's wife was nymph Mendeisand his daughter was Pallene. The first name was the name of an ancient city in Kassandra while Pallene is chronologically the second name of the Kassandra peninsula.

Halkidiki is by far one the most beautiful places in Greece. During your stay keep the myth alive and spread the word to your friends. We are sure that everyone will enjoy the story. 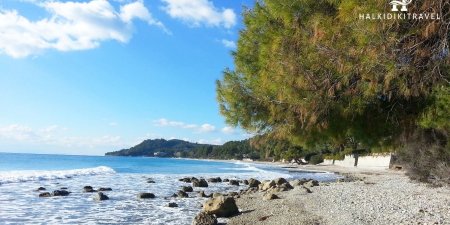