Halkidiki may be known for the beautiful beaches and the enchanting landscapes, but this place also hides a lot of history. If you are a lover of history and you are interested in archaeological tourism, this blog post is perfect for you. But even if you are not, it is worth visiting some of these places and learn the story behind.

There are several archaeological sites in the area of ​​Halkidiki, others more popular and others, that are mostly known by the locals. Let's see some of them, which are definitely worth visiting.

The ancient Greek philosopher, Aristotle, is a great philosopher and also a great scientist. He was born in 384 BC, in the area of ​​Stagira in Halkidiki. He didn't live a long time there, but the next generations, made sure to show off his work in a many ways. When Aristotle died, the citizens transfered his bones in Stagira and created a monument. The wall defines the western boundaries of the ancient city, surrounded by the sea. At the top of the hill, there are also the remains of the Acropolis. Between the hills, is the well-preserved rest public building, with a gallery and a monumental facade.

Moreover, in 2003, they created a theme park, called "Grove of Aristotle". This park is very interesting, as it includes many experimental physics instruments, that operate based of physics laws. Laws that are refered at Aristotle's writings and especially at his work called "Physics". You can find more information about the Aristotle Park here: https://www.halkidikitravel.com/en/blog-about-halkidiki/Aristotle-Park-901

Close to the village of Petralona, is the Petralona Cave. When it was discovered accidentally by a peasant, they called it Red Stones, because of the red color of the ground. The cave includes large amounts of mineral mammals, horse bones, cave bears, lions and more. In 1960 an entire skull and a part of the Homo Erectus skeleton was found. This particular finding belonged to a woman of 25-35 years and is about 700,000 years. The traces of fire found next to her are dated around 1,000,000 years. It is considered to be one of the first findings of man in Europe. In the section called the "Giant Cemetery", 14 different types of bones and animals were found. The large hall has huge stalagmites and the cave is generally spectacular because of its geological beauty.

The important city of ancient Olynthos was the most important political, economical and military center of Halkidiki from the 5th to the 3rd BC century. The ancient city was built on two hills. At the place of excavation which is open to visitors, the have been found ancient tombs, ancient coins, and uniquely beautiful mosaics dating to various eras of Greek history. Learn more about Ancient Olynthos here: https://www.halkidikitravel.com/en/regions-of-halkidiki/kassandra/olynthos-halkidiki-6

The Sanctuary of Zeus Ammon and Dionysus:

The The Sanctuary of Zeus Ammon is one of the most important temples in Halkidiki. At Afytos, the Sanctuary of Dionysus was founded in the second half of the 8th century B.C. by Euboean who settled in Afitis. The sanctuary of the Egyptian god Zeus Ammon was built at a small plateau on the northern side of the site. The roof was decorated with clay ceramics, embossed and colored. Its restoration is possible based on some architectural pieces found scattered. The sanctuary was retrofitted during the Roman period and they build two stands(called kerkides), between them a new small altar was built over the older one.

The Byzantine tower that dominates the hill to the right of the harbor of Nea Fokea, is believed to have been built in 1407 to protect the Monastery of St. Paul. It is made of stone, it is 28 meters high and it is the only one that has survived up to its crenellations. If you want to read more about the Byzantine Tower of Nea Fokea and Religious tourism in Halkidiki in general, you can read our relevant blog post: https://www.halkidikitravel.com/en/blog-about-halkidiki/religious-tourism-in-northern-greece-865

At the beginning of Mount Athos, pilgrims and visitors of Ouranoupoli admire the building that dominates the area, the famous tower of Prosphorion. It is a monument of medieval architecture with a long history, that played a role in various incidents in the area. There were many refugees that stayed in the tower, mainly from Propontida after 1922, but also the couple Lock in 1928, which helped refugees in World War I.

Ancient Mende was very economically prosperous, due to the exports of the famous Mendean wine and also was one of the colonies Eretria founded in the peninsula of Pallini in the 8th c. B.C. The archaeological site  is located on a hill, which descends to the sea. Underneath the acropolis (Vigla), underground storage facilities with pottery were discovered, that date from the 12th to the 7th c. B.C. In the plateau (Xefoto), a wall section of the classical city was discovered. In the cemetery that was found at the beach of Hotel Mende, 241 tombs were discovered, mainly of infants and young children. The pots that were found, are considered typical samples of the pottery in Halkidiki. 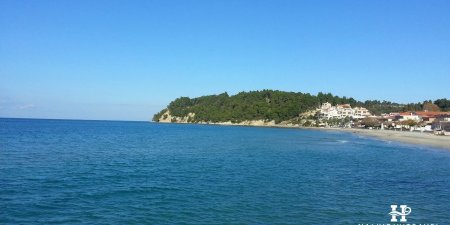