The tomb of Aristoteles in Olympiada

The tomb of Aristoteles in Olympiada

After investigations of many years, the discovery of the tomb of the leading philosopher Aristotle was achieved in Stagira, and particularly in the current region of Olympiada. The official announcements were made at the conference 2400 years Aristotle (384- 322 p. X.) ιn Thessaloniki which happened to coincide, with the the presence of many archaeologists and admirers of Aristotle worldwide. There may be no evidence but serious indications and documents  were presented and thats why excitement is caused in the archeological, and not only, community. Of course, an evidence was the fact that  the ashes of the ancient philosopher were discovered in the building.

The archaeologist Kostas Sismanidis, who was dedicated the last 25 years to the excavations in the area , now managed to bring to the surface all the proofs we need to be as sure as possible to the above disclosure.  The finding is a tower-like structure but its size makes it impossible to be used as a fortress. Generally, the shape of this is considered incompatible for any other use. Moreover, although it is built with quality standards both in materials and in work, it seems to has been created quite suddenly. This coincides with its use as a tomb. The building was located between the stoa of the 5th century and the ancient temple of Dios Sotiros and Athena Sotira (6th century BC), in other words,  between the archaic and the classical city in Liotopi peninsula.

His work and the dating of the findings were very hard due to changes that have taken place in subsequent periods and alter the image of them (during the Byzantine period, inside the original building, a tower of smaller dimensions was built). Moreover,  the publication of three volumes is expected, and it will include all the excavation material, photos and more. The findings show that the great philosopher died in Halkida and after combustion was transported there in a bronze urn.

This discovery is historical and one of the most important in recent years. 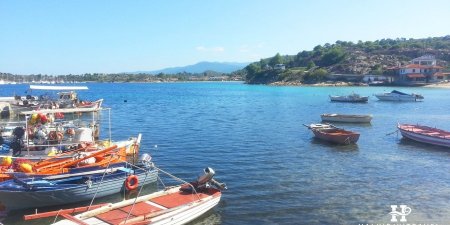