Nea Skioni is a coastal tourist village spread along the sandy coast in the southern part of Kassandra in Halkidiki. It has a harbor for boats and an authentic traditional Greek touch. It also supplies the whole area with fresh fish. Nea Skioni is only a few kilometers away from the hot springs of Aghia Paraskevi and is a point of attraction for tourists.

In the village, and in the nearby settlements of Aghios Ioannis and Anemi, guests can find modern accommodation for staying. We suggest the Rahoni Cronwell Park Hotel which is located a short distance from the coast. Here, you will find rooms which are family businesses and ensure your excellent service, such as Villa Olga.

The beach of Nea Skioni is long, sandy, and has been awarded for many years with the blue flag. Moreover, it has a large playground for your children with tennis and beach volleyball.

The seaside church of Panaghia Faneromeni is worth to be visited. It is 2 km away from the village and lies in the area of the Ancient Skioni. The church is built on the seashore and has frescoes from the 16th century.

Nea Skioni is located 24 km away from Kallithea and 78 km away from Polygyros. If you're on the east coast of Kassandra and you want to get to Nea Skioni, you can follow the road from Hanioti which leads over the mountain.

Nea Skioni got its name from the ancient Skioni, which was one of the earliest settlements-colonies in Halkidiki. During the Roman Empire the region had flourished. 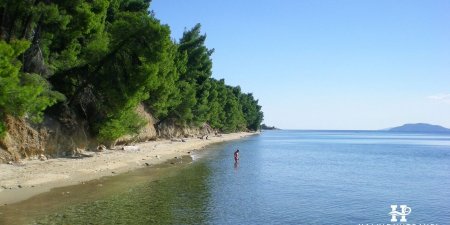